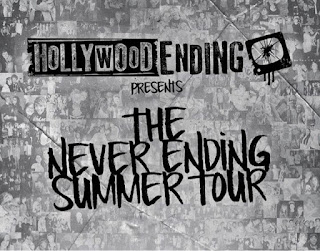 They say when you hear a piece of music you can be transported straight back to the time where you first heard it. Well, Hollywood Ending are a band that I associate with when they supported one of my favourite bands and also they remind me of New York City as I saw them when I was on holiday there. Whenever I hear them I get reminded of these things which isn't a bad thing. If you’ve read my blog before you’ll have read my previous posts about tours they have done in the past so it’s safe to say I like this band rather a lot.

The Never Ending Summer tour is a little different to tours Hollywood Ending have done in the past as this is the last tour that the band will be doing for the foreseeable future. Maybe it’s because they realise it’s potentially the last time they’ll ever tour together again in the UK, but for this tour the band offered fans more opportunities to spend time with them. As well as the VIP soundcheck and meet and greet ticket package, they also are offering ice cream parties before shows. The ice cream parties were much more intimate than the meet and greet, lasting around thirty minutes, with only 5 other fans in attendance at the show that I attended. It’s certainly a strange experience being sat in a room eating ice creams with the band that you’re seeing on stage in a few hours.
Support for the Never Ending Summer tour came from Six Stories Told and Astro Safari USA, a band that I saw support Hollywood Ending in America last year. I now own Astro Safari USA’s albums so it was great to be able to see them and know the songs that they were performing but for fans that hadn’t heard them before the offer catchy songs which will get stuck in your head for a long time after leaving the show. Six Stories Told were also entertaining. People in the audience were clearly huge fans of Six Stories Told with many flocking over to meet the band after their set had finished.
Although Hollywood Ending have recently released their debut full length album I felt like the tour was very much a tour where the set list was based on what fans wanted them to perform rather than a show that saw most of the songs being played form the new album. This wasn’t a bad thing at all as personally I thought the set list was fantastic.
The band came onto the stage to my personal favourite song from the new album, Zero Gravity before leading on to fan favourites One Wish and Not Another Song About Love. The UK leg of the Hollywood Ending tour saw band member Chris rejoining the band on stage after not being able to fulfil the US dates due to prior touring commitments which probably led to the addition of songs such as Grocery Song Rap. My favourite song of the night and I’m sure many others in the crowd of the Never Ending Summer tour was Boyband Song, a song that was put up on YouTube a year ago. This came with the band ditching the instruments and putting on the boy band dance routine that was in the video. Before you know it the tour is finishing up with You and Don’t Let You Down. Considering most of the band had flown in from America just 24 hours earlier they showed no signs for jet lag and kept the energy high throughout.
I stand by what I’ve said in my previous blogs and more so than ever now you must go see them in concert. All four members of the band are genuinely really nice people and have some serious talent, truthfully I think it’s a shame that they’re calling it a day. If you miss out on seeing Hollywood Ending on the Never Ending Summer tour, I think you should definitely keep an eye out on what they’re doing after the band.
The band still have a couple of UK dates left on the Never Ending Summer Tour so go check out a show if you can.
Posted by Melissa at 07:07