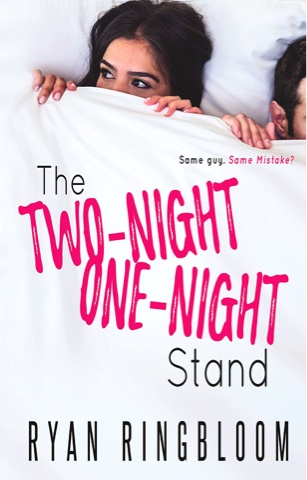 I knew from the second I read the blurb that The Two Night One Night Stand was exactly my kind of book. What I liked the most was the fact that neither of the characters would ever have a one night stand on a normal day yet here they both are. I felt that the fact they were both acting out of character made the characters very likeable. It was helped with the dual narrative told from both Holly and Matthew's point of views.

As promised this book did make me laugh at loud at certain points and I found that I whizzed through reading it as I loved it so much. If you read the blurb and think you'll love it I can almost guarantee that you will! Just as an aside this book contains lots of sex so just be aware if that's not the kind of thing you like to read about. I personally loved this book and the way in which the author writes. I'll certainly be checking out more of the authors others novels.

A girl. A guy. And a talking peen.

Holly Martin isn't the type to have a one-night stand. But a crushing break up, a sexy blind date, and a few shots of Fireball is about to change all that.

Matthew Daniels is an introverted PA who claims he’s too busy to date. But that doesn’t stop his older brothers from encouraging him to let loose and get out there, because as they put it - the right girl won’t just walk up to you.

But what if she does?

Is it possible for a one-night stand that happens twice, to actually become more? Could two nights of reckless debauchery actually lead to true love? Or is this just another case of a whisky induced disaster?

This Romantic Comedy is sure to have you laughing, cringing, rolling your eyes, shouting at the pages and looking for a shot glass of your own.