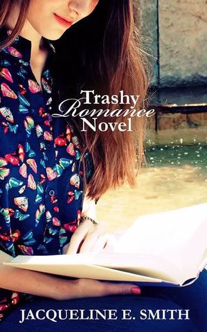 Whenever I get into a conversation with anyone about books they always ask me what genre of books I enjoy reading. Queue my awkward mumble of 'oh I read a lot of young adult books and um...trashy romance novels...'. I love author Jacqueline E. Smith's Boy Band novels so when I heard she was releasing a novel called Trashy Romance Novel its safe to say I got excited about reading it. It sounded exactly like a book that was going to be my cup of tea!
Trashy Romance Novel tells the story of Delaney. Delaney is quite sweet and innocent so from an outsiders point of view she is pretty much the last person on the planet you'd expect to write a trashy romance novel. Yet she has and now her novel is so popular its being turned into a movie starring some very famous actors. Delaney flies to Scotland with her best friend Gemma to go visit the movie set and watch the all star cast, which includes the rebellious Colin Ward, playboy Benjamin Wyndham and Delaney's celebrity crush Matthew Kent, film the movie. Of course in true trashy romance style, when the normal girl meets the irresistible actor - you know her summer is going to be an interesting one!
As I had such big expectations of this book I was worried that I just wouldn't enjoy it, but I'm very happy to say that I absolutely loved this book. I love the idea of writing a book and then suddenly you find yourself watching your celebrity crush who you pictured when writing it actually playing the character you wrote so for me the storyline truly gripped my attention. If you're like me and read a lot of romance novels and I can guarantee that Trashy Romance Novel won't disappoint.

The characters were great to read about. Delaney is so down to earth and likable which makes the book that much better to read about. Her best friend Gemma is also one of the greatest things about this book. Delaney is reserved whereas Gemma is outgoing and much more forward of situations. The fact that they're both so different really added to my enjoyment of the book as some moments really made me laugh reading about how they both responded to situations. The love interests in this book are the perfect romance novel characters too. Without spoiling the book, if I had to criticise the book, my only slight issue with it, is that I would've liked to read a little more about Matthew Kent particularly as Delaney liked him so much. However, it really didn't spoil my enjoyment of the book at all so it really isn't an issue.

The book itself is wrote quite unusually. Not only does it tell the story of Delaney's Scottish adventures but it also weaves in chapters of Delaney's book in between. To be honest I'm not usually a fan of novels which switch chapters up like this as I find I get engrossed in one story and it then annoys me when it switches to another but in this particular case I felt it worked well. Delaney watches a lot of her book be filmed so its interesting to actually read segments of the story which she's there watching being filmed. I've certainly worded this in the most confusing of ways but I can assure you it works very well in the novel.

It all started with a crush.
How cliché is that? I mean, of all the things to motivate a person to do something, how often does it go back to a silly infatuation? More often than most of us would probably care to admit.
Of course, this wasn’t an ordinary crush on a cute coworker or a charming friend of a friend I hooked up with at a party. No, I’ve never met the guy who inspired my books.
But I’m about to.

Delaney Brooks is the author of The Queen’s Surrogate, the “sinfully satisfactory” romance novel that swept readers around the world off their feet and into the fictional embrace of His Majesty, King Malcolm.

When her book is adapted into an eight-part miniseries, Delaney and her best friend Gemma fly to Scotland for what promises to be two months of lush green mountains, historic castles, and hot celebrity co-workers, including the gorgeous Matthew Kent, British playboy Benjamin Wyndham, and Hollywood’s hottest reformed rebel, Colin Ward.
Posted by Melissa at 18:14