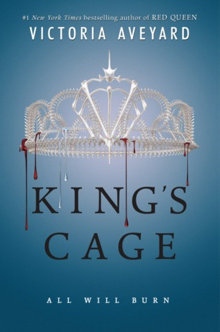 Kings Cage is book number 3 in the series and I have been pretty much desperate to read this book since the second I put down the previous book. So it's safe to say I was excited to get a copy of this book to review - big thanks to Orion Publishing Group and Netgalley.

Kings Cage picks up right where book 2, Glass Sword finished. It's worth noting that this book definitely does just continue on so please read the first two books first to know the story and get a better idea of the world that you're about to be thrown in to.

Kings Cage starts with Mare as Maven's prisoner as she surrendered herself to him at the end of the previous book. Now she's stuck in a life where her powers have been stopped thanks to silent stone. Away from her captivity war is on the horizon as Maven is determined to bring down the Scarlet Guard and remain control of his kingdom whilst the new bloods start learning their powers.

This book shifts focus back to Prince Maven - which I absolutely loved! Maven gets completely stripped back and you get to find out more about exactly why he's like he is. It doesn't change the fact that he's still pure evil but it's interesting to hear more about it.

I personally love the way that Victoria Aveyard writes this book series and Kings Cage was no exception to the rule. It manages to capture me in a way that so few books do. I spend my days at work at the moment creeping down corridors on the way to the bathroom just to make sure I don't get discovered by guards of Prince Maven! The story has just absolutely taken over my life which is only credit to the authors superb writing of this book.

If you've loved the first 2 books in the series then you must buy Kings Cage as you will not be disappointed and like me you'll be eagerly awaiting the next book in the series.

In this breathless third installment to Victoria Aveyard's bestselling Red Queen series, allegiances are tested on every side. And when the Lightning Girl's spark is gone, who will light the way for the rebellion?

Mare Barrow is a prisoner, powerless without her lightning, tormented by her lethal mistakes. She lives at the mercy of a boy she once loved, a boy made of lies and betrayal. Now a king, Maven Calore continues weaving his dead mother's web in an attempt to maintain control over his country—and his prisoner.

As Mare bears the weight of Silent Stone in the palace, her once-ragtag band of newbloods and Reds continue organizing, training, and expanding. They prepare for war, no longer able to linger in the shadows. And Cal, the exiled prince with his own claim on Mare's heart, will stop at nothing to bring her back.

When blood turns on blood, and ability on ability, there may be no one left to put out the fire—leaving Norta as Mare knows it to burn all the way down.