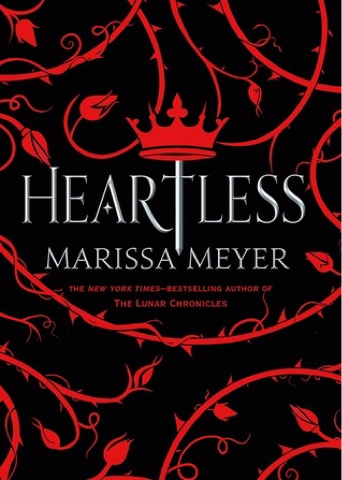 Heartless by Marissa Meyer tells the story of Catherine, she's the daughter of one of the most powerful families in Wonderland which makes her very desirable. Due to her position in society she is expected to marry well and follow rules. Catherine however is different, she is friends with the staff and only desires to open up her own bakery in Wonderland. However, despite her parents best efforts and a potential proposal from the King, she meets Jest, the court entertainer and falls head over heals in love with him.

I am a big fan of books that are loosely based on other well known stories and Heartless is one of the best retellings I've read. It's so fascinating to read about how things in Wonderland aren't necessarily what you're lead to believe.

The characters are so instantly likeable. Despite her position in society Catherine is nice to everyone and doesn't judge people. She is headstrong and knows what she wants with her life. Personally I just thought she was a wonderful character to read about. Somehow I didn't even make the connection as to who she was representing in Wonderland until quite far into the novel which only goes to show what a well written book this is. The story and characters have a familiar feel to them with a breath of originality thrown in for good measure. My personal favourite is Jest who is the perfect combination of a character creating just the right amount of mystery around him to make you just want to keep reading more.

If you love fairy tale stories then you must pick up Heartless by Marissa Meyer. This is definitely going to be one of the must read books of 2017!

Catherine may be one of the most desired girls in Wonderland and a favorite of the unmarried King, but her interests lie elsewhere. A talented baker, she wants to open a shop and create delectable pastries. But for her mother, such a goal is unthinkable for a woman who could be a queen.

At a royal ball where Cath is expected to receive the King’s marriage proposal, she meets handsome and mysterious Jest. For the first time, she feels the pull of true attraction. At the risk of offending the King and infuriating her parents, she and Jest enter into a secret courtship.

Cath is determined to choose her own destiny. But in a land thriving with magic, madness, and monsters, fate has other plans.