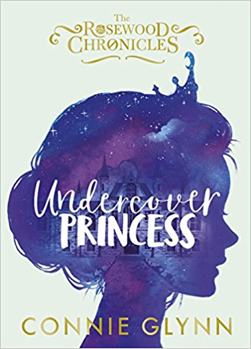 Lottie Pumpkin (yes this is her real name!) is obsessed with the world of fairy tales. She loves the idea of being a princess, meeting Prince Charming etc etc. So when she starts her new school, Rosewood Hall, the last thing she expected was to be thrown completely into the world she fantasises about thanks to her new roommate Ellie Wolf.
It’s worth mentioning that I’m writing this completely impartial. Truthfully, I had no idea that author Connie Glynn was a YouTuber prior to writing this blog post so I didn't want to read the book based on the author. However, I've been seeing this book a lot lately, whether it’s been through a sampler at events or people posting about it on twitter so naturally after loving the sampler I read I knew this book would be exactly my cup of tea.
I read this book insanely quickly because it just captured my attention. It was so full of twists and turns! Ok, yes some things were very predictable but then in the next breath some things happened which I certainly didn’t expect. I love the idea that the story is based in a boarding school. I actually thought the descriptions Rosewood Hall were wonderful and it was quite easy to imagine the setting.


I really loved the characters too. Lots were introduced but it wasn’t hard to keep up with who was who and the 3 main characters were so instantly likeable which made them easy to read about. I had a few issues with certain characters, such as the villain for example whose motives I felt were a little nonexistent. Despite a few little things I thought many of the characters added something to the story. I am however hoping that some of the more minor characters will be discussed more in future novels.
Although I really enjoyed reading this book I feel that this would’ve been one of those books I would’ve obsessed about when I was around 15 so I would highly recommend this for people around that age. However, if like me you read the blurb and like the sound of the story I think you’ll still love it as I certainly did.

I know I for one am very ready for the sequel of this book already! Ok yes I’ve read books that are better written but I enjoyed the story and its interesting characters that captured my attention from start to finish. Honestly, for a debut novel I thought it was great. What more do you want from a book really?

When fairy tale obsessed Lottie Pumpkin starts at the infamous Rosewood Hall, she is not expecting to share a room with the Crown Princess of Maradova, Ellie Wolf. Due to a series of lies and coincidences, 14-year-old Lottie finds herself pretending to be the princess so that Ellie can live a more normal teenage life. Lottie is thrust into the real world of royalty - a world filled with secrets, intrigue and betrayal. She must do everything she can to help Ellie keep her secret, but with school, the looming Maradovian ball and the mysterious new boy Jamie, she'll soon discover that reality doesn't always have the happily ever after you'd expect... A thrilling world of parties, politics and bad ass princesses, this is the first book in the brand new series THE ROSEWOOD CHRONICLES.
Posted by Melissa at 15:23