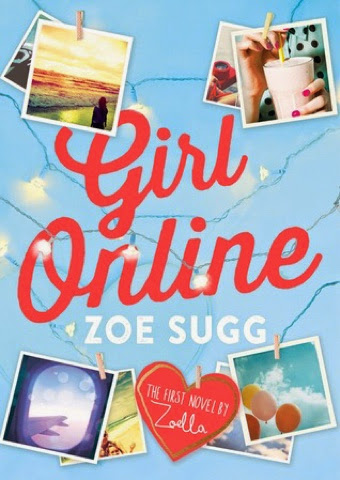 Before I start this review I have to mention that I have no interest in Zoe Sugg aka youtube phenomenon Zoella. I can honestly say that prior to writing this blog I had never watched one of her videos before which is probably a sign that I’m getting older. I don’t really understand the YouTube craze that is putting youtubers as a famous face right now and making any product they put their names to sell an insane amount. Lots of people who make videos are having the opportunity to release books recently including Sugg’s boyfriend, Alfie Deyes, Carrie Hope Fletcher and of course author of the hugely successful The Fault In Our Stars, John Green. Zoe Sugg’s book, Girl Online, has been mentioned everywhere recently due to its record breaking first week sales for a debut novel and the fact that it turns out it has been written by a ghost writer. I have to admit I was curious so decided to give the book a read.
Girl Online is about a fifteen year girl called Penny who suffers from panic attacks. I do like the fact that panic attacks are included in the book as I feel it’s something that should be discussed more openly with the younger generation. Despite this, it’s something that just seems to happen every so often to Penny with little focus drawn to it, when they happen I feel that the event is somewhat glossed over. Gay best friend and neighbour, Elliot, tries to help her get through her life the best way he can but for some reason I just can’t warm to him as a character. Penny shares her experiences on her online blog, Girl Online which draws parallels to Sugg’s own life. Penny’s blog grows more and more popular as the book progresses.
Penny’s mother owns a wedding shop and one day an American couple wonder into the shop asking if it would be possible to plan a wedding in New York at very short notice. The couple pay for Penny’s family and Elliot to fly to America and stay in the very upmarket Wardolf Astoria hotel. It is here she meets the chef’s grandson Noah where they embark on a whirlwind holiday romance which the rest of the book revolves around.
Noah seems a nice enough character, despite him hiding the huge secret that he’s a famous musician, which I’m sure everyone reading the book figures out pretty early on. However, what I really dislike about Noah and Penny’s relationship is that her parents happily let her go off on her own with an 18 year old boy they barely even know in a foreign country. Even if her parents are busy arranging a wedding they shouldn’t have allowed this. I also find his actions to be a little ridiculous at times for an 18 year old. The way he builds a tent for Penny and puts a keep out sign on it for example was especially hard to read when he is left in the house alone with her, no 18 year old would do this. I think it’s a terribly childish relationship and I find it hard to believe that an 18 year old wants to have a relationship with a 15 year old. I know it’s not such a big age gap but I know myself at that age wouldn’t have wanted anything to do with a fifteen year old. Despite this Noah seems to be the nicest person in Penny’s life other than her family so he makes the story a much more enjoyable read.
Towards the end of the book, Penny’s new found online popularity turns on her. I don’t want to reveal what happens (though when you read the book it isn’t too hard to figure it out early on) but I think that it was good idea to write in that the internet is not always a nice place and the people behind their computer screens aren’t always going to be on your side. An incident at the beginning where Penny falling over is broadcast on the internet is also an example of this.
I am in no way in the target audience for this book anymore but I didn’t find any of the characters relatable at all. Despite all this, its huge sales obviously are suggesting that many younger people are reading it which can only be a good thing and touches upon panic attacks which I feel is important. I believe if you know someone who is a young teenage girl they will appreciate reading this book. I’m sure they’ll find the embarrassing moments Penny goes through more relatable than I did and will certainly love the idea of a holiday romance with a rock star. I don’t agree that this book wasn’t up front about being ghost written from the beginning but for fans of Zoella I’m sure they’ll enjoy this book regardless, I just know that I won’t be the front of the queue when her next book is released.
Girl Online - Zoe Sugg. Click here to buy from Waterstones.
Posted by Melissa at 13:43