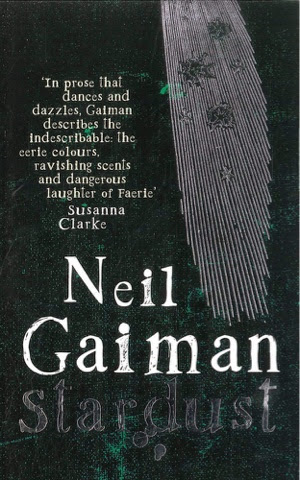 I am that really annoying person who goes to see the film version of books at the cinema and walks out moaning about how it just isn’t as good as the book. Stardust was a film that I’ve always loved and up until a short while ago, I was blissfully unaware that the film is actually based on a novel by Neil Gaiman. I don’t know if it is because I have watched the film version that many times or because I saw the film first but in this case (and the only case that I can think of) I actually preferred the movie.
If you have yet to see the 2007 film or haven't read the novel, Stardust is based on Tristan Thorn and his adventure to find a star. Tristan wants to marry his love Victoria Forrester and the only way that she’ll agree to give him her hand in marriage is if he brings her back the star they watch fall from the sky when the conversation is taking place. Tristan lives in a place called Wall which is on the boundaries to the mythical world of Faerie which unsurprisingly can only be accessed through a gap in the wall that is always guarded by the residents of Wall. The star falls at the mythical side of the wall meaning that Tristan somewhat fearlessly is required to cross the boundary. It is quickly discovered that not only is the star a woman but that many other people are desperately hunting her down for darker reasons than Tristan’s. I love the idea that this mythical world is just beyond a gap in the wall. Beyond the gap in the wall couldn’t be any different, it’s a world where stars land as humans, unicorns roam the lands and witches are common to name a few differences.
Some of the parts that I absolutely adored in the film, it turned out were never actually in the book to begin with. Ironically it’s usually these bits that if I had read the book first I would’ve disliked. I know for a fact I would’ve loved this book a lot more if I had read it before I had watched the film, part of me wishes I had the opportunity to forget ever seeing the film so I could’ve properly enjoyed the book. My major flaw about the book, without revealing any spoilers, is that in the film a confrontation happens at the end whereas in the book it never happens. It just ends. The whole book revolves really around which person chasing the star ultimately gets her but none of the other parties particularly fight for her in the book, it just sort of happens and for some reason everyone is ok with that. I also particularly disliked the sky pirate’s scene in the book and if you’ve seen the film you’ll know why. Despite all this, I really loved the way that Neil Gaiman writes and the worlds that he created Stardust so I will be definitely reading more of his books in the future.


Stardust - Neil Gaiman. Click here to buy from Waterstones
Posted by Melissa at 14:58