P.S I Love You - Cecelia Ahern 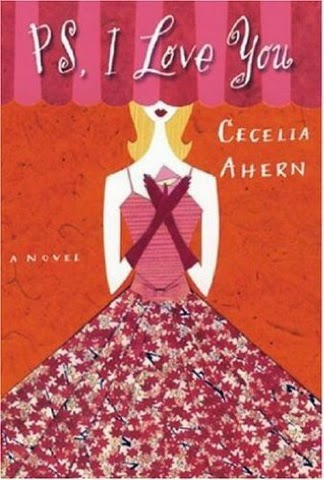 I may have a little sob every so often at a film or a book but I hardly ever full blown cry. The film version of P.S I Love You by Cecelia Ahern was one of the only films I have ever watched that made me have a full blown; I’ve used an entire box of tissues because I’m crying so much meltdown. It is for that reason I have been holding off reading the book for quite some time, despite having rushed out to buy the book after I watched the film.
30 year old Holly is completely and utterly in love with her soul mate Gerry and she can’t imagine spending a day of her life without him. Then the unthinkable happens and Gerry dies of a brain tumour and Holly is left in pieces with no clue about how she is meant to get on with her life without him. Gerry knew how much Holly would struggle without him so writes a series of very short letters for her of which she is allowed to one a month in a bid to help her move on. Slowly but surely, with Gerry’s letters help she starts to accept that Gerry isn’t coming back and begins to start her life again.
The beginning of the book lived up to my high expectations. It really makes you stop and think about how easily someone can be in your life one day and then be gone the next without much warning. However, that’s as far as my love for this book went. I just found it so difficult to like book Holly and her friends and at points I just found the book boring to read. When I got around half way through the book I was so close of just calling it a day and giving up reading anymore of the book. It got to the stage where I was finding reading it an effort. The film was so engaging but the book just didn’t have anywhere near the same effect in my opinion. The storyline of the book is brilliant but it just worked so much better as a film than as a book.
I don’t know if it was because I was expecting a lot from P.S I Love You but I just didn’t enjoy it. Save yourself the time of reading the book and watch the movie or pick up another one of Cecelia Ahern’s novels as her other books that I’ve read are fantastic.

Click here to buy P.S I Love You - Cecelia Ahern from Waterstones.