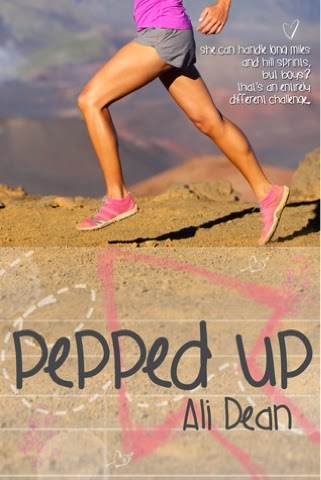 Pepped Up follows the story of sixteen year old Pepper Jones. You'll quickly discover that Pepper loves running and is extremely good at it. I have to give author Ali Dean some major credit for every scene where Pepper is running. I don’t run unless I really have to in order to catch a bus, yet somehow with Dean's descriptions of Peppers running and training I felt the overwhelming urge to go for a jog every time I picked this book up to read.

Pepper's life is complicated by one thing, or more specifically one person, her best friend and the school's football playing heartthrob, Jace Wilder. Pepper and Jace are neighbours but due to Pepper's parents dying in a car accident and Jace's parents abandoning him when he was young, they both end up being brought up by Pepper's grandma, meaning that their friendship is more like siblings. Unfortunately for Pepper she has started to see Jace as much more than a friend and little does she know her feelings are reciprocated.

Personally I can’t see why Pepper likes Jace. The book is obviously playing at the good girl liking the bad guy kind of relationship but to me Jace just seemed a complete tool. I started to dislike him even more once he started becoming even more distant from Pepper when he started drugs. Despite drugs and drinking being a large part of the book, the author doesn’t glamourise it at all which I like. It certainly isn’t seen in a positive light. Jace was also very controlling of Pepper and didn’t approve of her dating anyone even though he doesn’t make a move to date her himself. Although he did have some moments where I started to like him on the whole I didn’t warm to him one bit.

The book tumbles through Pepper's feelings for Jace until the new kid in school and fellow runner, Ryan Harding, comes along. Although he is sporty like Jace, aside from that they're polar opposites. Ryan has only ever had one long term relationship, Jace seems to flirt with any female with a pulse, Ryan is laid back, Jace is uptight, the list of opposites is endless. Most importantly Ryan seems to really like Pepper as more than a friend, something that Jace fails to do. Before you know it, Pepper is faced with a decision. Can she be in a relationship with Ryan when she has such strong feelings for Jace?

I found myself getting constantly frustrated at this book. Not because it was it was a bad book because it isn’t but because Pepper doesn’t end up with who I ultimately wanted her to. It’s my main issues with love triangles. Pepped Up has a sequel which I am very excited to read. I hope it’ll give me answers to questions that I have and find out how Pepper’s relationship progresses. If you’re a fan of young adult books and love triangle relationships you’ll love this book. I’ll certainly be adding Pepped Up book number 2 to my must read pile.


Pepped Up - Ali Dean. Click here to download the kindle edition
Synopsis -
Pepper Jones is ready for an epic cross country season. She wants to qualify for Nationals, and she’s willing to do anything it takes to make it happen. She can handle long miles and hill sprints, but boys? That’s an entirely different challenge.

Pepper’s never considered revealing her deeper feelings for her longtime friend, Jace Wilder. After all, he’s got the personal magnetism and good looks to hook just about any girl in town — and he has. Their friendship stands apart from high school social circles, and they’re both just fine with that (or at least they pretend to be).

That is, until running star Ryan Harding moves to town.