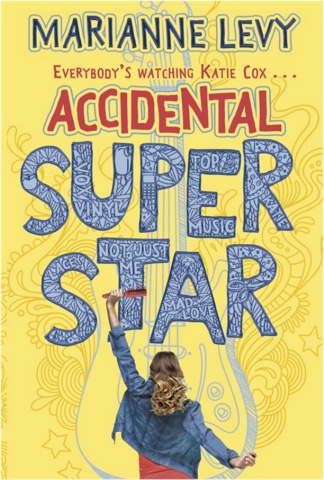 I have been desperate to read Accidental Superstar since I first read the blurb – it sounded just like my kind of book and thankfully it does not disappoint. Accidental Superstar tells the story of Katie. Katie’s parents are divorced, her dads moved far away and her mum has found a new man. Katie, her sister, mum and new man, Adrian, move into a new house together, except it isn’t a picture perfect house. It is falling apart and even has the odd mouse running around. Then one day a video of Katie, her friends and Adrian performing is put up on YouTube and suddenly Katie turns into an internet sensation overnight.

I really liked Katie. Ok, she’s not the most perfect character as she certainly as her flaws, but what teenager doesn’t? At the end of the day she has to live with her mum’s new boyfriend who she doesn’t particularly like, move around from her best friend, live in a dump and worse of all travel on the busy to school! Overall though I found her a sheer delight to read about. Her family and friends are all fantastic characters and at the end of reading it really makes you appreciate how important it is to have good friends/family as they really do always have your best interests at heart.

Accidental Superstar transported me back to the naivety of being a teenager which only added to my enjoyment of reading this book. You’re completely involved in Katie’s enthusiasm, a single, a record deal, a tour! You just get more excited with Katie as the book progresses. It really meant that the twists and turns throughout the book came as a complete surprise.

I thoroughly enjoyed Accidental Superstar. If you’re ever thought about uploading a video onto YouTube and it going viral then you will love reading Katie’s story in this book! Roll on book number two in the series!

If I'd known that two million people were going to be watching, I'd probably have done a bit of tidying up.

Katie Cox is used to going unnoticed, by her mum, her dad, even her best friend. But when a video of her singing in her bedroom goes viral, she becomes a superstar overnight. As the views skyrocket and a recording contract beckons, the real world starts to feel very far away.
And now Katie's riding high on her newfound fame. But the higher she goes, the further there is to fall...

Accidental Superstar by Marianne Levy is the first in a hilarious series about a girl who accidentally finds fame singing online.

Accidental Superstar by Marianne Levy is out now. Click here to buy from Waterstones.
Posted by Melissa at 14:46