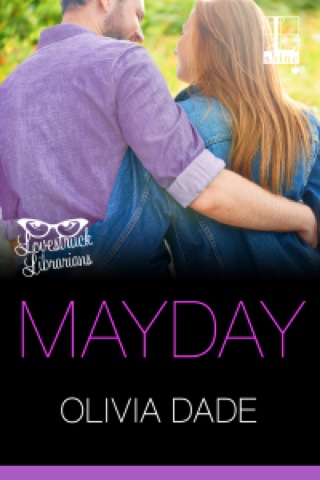 As it's the Mayday bank holiday weekend it only seems appropriate that I post up my review of Mayday by Olivia Dade.

Mayday is the turn of librarian, Helen. Helen is back living at home as her part time librarian job doesn’t give her enough money to afford to move back out. On a night out with her fellow librarians she see’s Wes, the guy who she fancied the pants off in school, except now he’s the town mayor. The only problem is, he barely noticed her existence throughout school – what chance did she get of getting the majors attention now? Unfortunately for Helen, he catches Wes on one of the worst nights of his life so he eagerly jumps at the chance to take her home which ends up ultimately driving Helen away.

In my opinion, Mayday is the most realistic story yet of the Lovestruck Librarian series. Helen is a normal person that you can very easily relate too which only adds to the stories likability. I absolutely love the fact that after Wes essentially had a one night stand with her, she made him work to gain even a friendship from her, he also went through a journey himself both of which I feel is a refreshing change in this genre of books. I adore Olivia Dade's writing style and it only helps you gel with the characters.

Yes at times this book is a little far fetched. In real life would Wes really chase after Helen so much? He couldn’t remember her from school and he’d only known her a few hours. It took me a while to get past that but once I did I really loved this book. Wes really tries to make an effort with Helen and ultimately they both adore each other and would literally do anything to help the other which helped cement this book into my favourite in the series so far.

I really enjoy this series of books and Mayday is such a great addition to the series. It's refreshing to see more of the librarians out of the library environment. I've really enjoyed the other books in the series but personally Helen's story has been my favourite so far.

Helen Murphy loves her supportive family, her close-knit circle of friends, and her part-time job at the library. What she doesn't love: the fact that she's a thirty-six-year-old near-virgin who lives in her parents' house. Eager to move out and reclaim her independence at long last, she's determined to get the library's new Community Outreach Coordinator position. Even if that means working side-by-side with the one man she desperately wants to avoid--Niceville's ambitious mayor Wes Ramirez, who happens to be her only previous lover, and the source of her greatest humiliation…

Wes needs to make up for his disastrous one-night--actually, make that one-hour--stand with deliciously nerdy librarian Helen. As they plan the city's upcoming May Day celebrations together, he'll try to prove he can do better, in bed and out. It may take every bit of his creativity and determination, but their budding romance has already gone down in flames once...and he'll be damned if he'll let Helen go a second time.


Mayday - Olivia Dade is released 10th May. Click here to preorder from Amazon