How To Keep A Boy From Kissing You - Tara Eglington 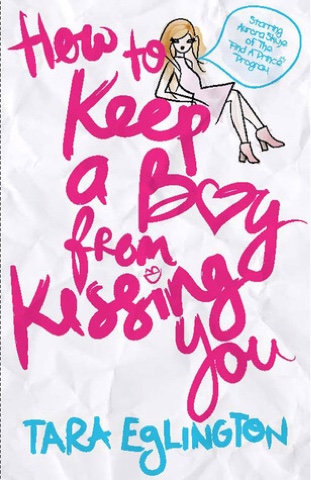 How To Keep A Boy From Kissing You by Tara Eglington is about sixteen year old Aurora Skye. Her mum walked out on her family and she’s left at home living with her NAD (new aged dad). Despite all her goings on at all, she’s extremely grounded and holds her morals high. Her biggest moral? She is saving her first kiss for her real life prince. The only problem with that is that no matter how hard she tries to find her prince he doesn’t seem to exist. Aurora and her friends audition for the school play and suddenly she finds herself cast as the lead alongside her neighbour and sworn enemy Hayden. It quickly becomes apparently that there is a kiss scene between the two causing Aurora’s wish to save her first kiss for her prince to be jeopardised.


The title caught my attention from the start and I’m happy to say that I actually really liked this book. The outrageous extremes Aurora goes to prevent people from kissing her made me laugh out loud at times but then on the flip side Aurora’s need for approval from her mother despite everything is heartbreaking. Although the characters are somewhat exaggerated I do feel like they’ve captured high school life perfectly which I felt helped make the book even better.
I adored the characters. Aurora was instantly likeable and her friend group are just as enjoyable to read about. However, for me the stand out character is Hayden. He is simply one of the nicest characters in a book; I can’t really explain why without revealing spoilers but just know that he is a great character. I have to say though that all of the characters are so well developed and I love the way the author writes them.


At times Aurora’s obsession with preventing anyone from kissing her (even when it was necessary for the play) got a little monotonous and from pretty much page one I predicted how this book would end, but personally I think that it only made the last few chapters all the more enjoyable. Although the whole book sort of revolves around Aurora’s first kiss, the actual romance in the book in very little. Certain chapters were just plain adorable though and I think the levels of romance for How To Keep A Boy From Kissing You is perfect.
If you’re looking for a light hearted book I think you will enjoy this book. I would love to go back in time and give this book to 15 year old me as I think she would’ve absolutely adored this book! Having a quick google it appears that a sequel is available for this book, I’ll be patiently waiting for its UK release date as I can only imagine how swoon worthy book number two is going to be!


Synopsis –
Executor of the Find a Prince Program™ and future author, sixteen-year-old Aurora Skye is dedicated to helping others navigate the minefield that is teenage dating. Counsellor-in-residence at home, where her post-divorce ad-agency father has transformed into a NAD (New Age Dad) intent on stripping his life bare of ‘the illusionary’ (i.e. the removal of home furnishings to the point where all after-hours work must be done in lotus position on a hemp cushion) Aurora literally lives and breathes Self-Help.

When the beginning of the school year heralds the arrival of two Potential Princes™ who seem perfect for her best friends Cassie (lighthouse beacon for emotionally fragile boys suffering from traumatic breakups) and Jelena (eye-catching, elegant and intent on implementing systems of serfdom at their school) it seems as if Aurora’s fast on her way to becoming the next Dr Phil.

As Aurora discovers, however, Self-Help is far from simple. Aurora’s mother arrives home from her extended ‘holiday’ (four years solo in Spain following the infamous ‘Answering Machine Incident’) throwing the NAD into further existential crisis. With Valentine’s Day drawing closer and the new Potential Princes not stepping up to the mark, Aurora is literally forced to take to the stage to throw two couples together. However, being cast opposite Hayden Paris (boy next door and bane-of-Aurora’s life) in the school production of Much Ado about Nothing brings challenges of its own. Not only does Hayden doubt that Cupid is understaffed and thus in dire need of Aurora’s help, but playing Beatrice to his Benedict throws her carefully preserved first kiss for a Prince into jeopardy. As Aurora races to save love’s first kiss and put a stop to the NAD’s increasingly intimate relationship with her Interpretive dance teacher (guilty of putting Aurora on detention for a ‘black aura’) she is left wondering who can a self help guru turn to for help? Can she practice what she preaches? And can long-assumed frogs become Potential Princes?
Posted by Melissa at 11:52