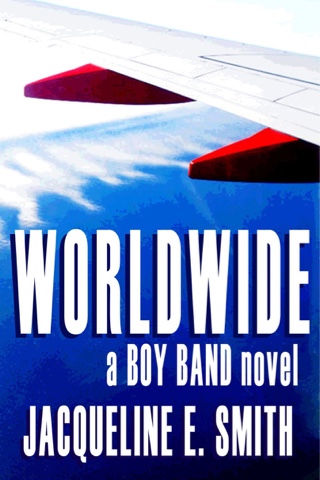 Flashback to March and I downloaded a lot of books onto my kindle to read on my flight to America, amongst them were the first 2 books in Jacqueline E Smith's Boy Band series. Well I finished both of those books in the departure lounge before I'd even stepped foot onto the plane because I just couldn't put them down and when I came back all I could talk about to people were these incredible books I'd read rather than my holiday. So it's safe to say I was very excited by the release of the next book in the series, Worldwide.
Melissa's relationship with Sam has finally been revealed. Except not just to family and friends, to every single person in the world as Sam just happens to be a member of the worlds most popular band, The Kind Of September. The backlash she gets from dating Sam is exactly what she expected with every move herself and Sam make being documented to the world, top that off with the fact the band are falling to pieces around them, thanks to secrets everyone was hiding. Life on the road with a world famous boy band may not be as rosy as you imagine it to be!
Worldwide focusses on life in the band and more than previous books, which means you get to really get introduced to the other members of the band. They're focussed on a lot in previous books but I feel that Worldwide is the book where the attention is drifted somewhat off Sam and Melissa's relationship and more onto the band as a whole. The Kind Of September are full of varying personalities but they all work so well in the book. Personally I enjoyed reading about each member and discovering more about them as individuals as well as the dynamics between the band members.
Sam and Melissa's relationship in Worldwide is as adorable ever. Sam is pretty much the ultimate book boyfriend who you wished was real. The author is so clearly loves boybands as much as I do as she has perfectly captured every wonderful trait that you picture in your head that your favourite band member has. This certainly isn't a bad thing, as it has made Sam a delight to read about. Melissa is such a lovable character too. Even though her relationship is now out in the open she still remains a strong character and although she makes mistakes she truly does have everyone's bests interests at heart. Plus I may be a tad biased but she has a great name so that just makes her even better to read about!

I love the way in which the author writes. The story just flows so effortlessly. The characters and world they're apart of are all so realistic that you genuinely feel like you're living the life that's in the book whilst your reading. At times I genuinely had to remind myself that I wouldn't actually be going on tour with The Kind Of September - getting this sucked into a book isn't something that doesn't happen to me very often when reading books so its safe to say this book is incredible. My only complaint about the book is the ending, I can't believe the cliffhanger it leaves you on and that I now have to wait patiently for the next book to be released. However, on the flip side the ending means that hopefully another Boyband novel is going to be on it's way which makes me very happy.
For anyone whose ever loved a boyband you will absolutely adore these series of books and I cannot urge you enough to read the entire series. I feel like you shouldn't read any of the books in the series as standalones a so please start at the beginning and read your way through. I read a lot of books and books that you just wish would never end/want to keep reading over and over again are few and far between, this series of books definitely falls in that category. Please stop what you're doing right now and buy these books! Now as for me, I'm off to go start reading the Boyband books from the beginning once again as I just can't get enough of reading about Sam and Melissa.
Click here to buy Worldwide - Jacqueline E Smith from Amazon

Melissa Parker’s secret is out.

But then, that’s nothing compared to the other secrets and scandals that plague The Kind of September. In the midst of their long-anticipated world tour, a toxic combination of infidelity and betrayal has left the band and its fan base angry, confused, and ultimately broken.

No one ever said that life with the world’s most popular boy band was easy, but in spite of everything she's seen, Mel is still willing to believe that it’s worth it.
Posted by Melissa at 19:38