On The Other Side - Carrie Hope Fletcher 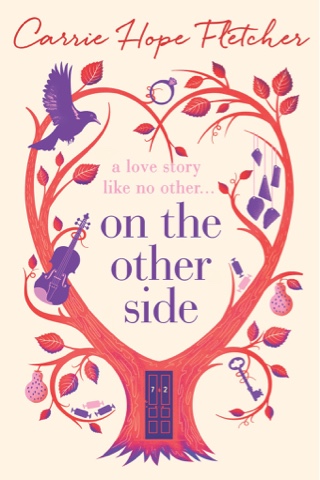 If you read my review of Carrie Hope Fletcher's first book, All I Know Now, you'll know that I wasn't overly keen so my expectations weren't high for her first fiction novel, On The Other Side. Really I just don't think I was the target audience for All I Know Now, regardless I think Fletcher is an extremely talented individual and the synopsis for her new book sounded brilliant so I had to give it a read. Well, I've just finished On The Other Side and I am very impressed.

On The Other Side tells the story of Evie Snow, who at the age of 82 has just died. Evie is stuck in limbo, she can't enter heaven as her soul is too heavy. The only way she can pass through is to go back to the living world and get rid of the things that are making her soul heavy. It is soon discovered that Evie has been keeping three big secrets to herself her entire life and it is these secrets that are weighing down her soul.

I loved the story and I just wished that I had thought of this idea myself! I find a lot of books that flick from past and present tend to involve a lot of page turning backwards to remind myself of what's happened but On The Other Side effortlessly flows. The book has a slight magical element too which the author somehow managed to write and weave into the story with it remaining believable in the real world. My particular favourite example of this is how the wall transports Evie back into the living world.
It did take me a couple of chapters to get completely hooked to the story but once I did I just couldn't put the book down. From around 70% of the book onwards it truly was a book you couldn't put down as things started to weave together. On The Other Side is sickeningly romantic at times (which I love!) and provided some moments which genuinely made me cry - pretty much everything I want from a book! I did have a few issues with the plot but nothing I couldn't get over and it didn't stop my enjoyment of the book at all.
Aside from the fact the names of all the characters are wonderful, the characters are a delight to read about. I personally loved Evie Snow. Her vibrant personality just streams out of the pages and you can't help but love her. Having watched many of Fletcher's YouTube videos, I can certainly see connections between herself and Evie, I'm not sure whether this is intentional but it'll certainly make her loyal following happy to see the parallels. Vincent Winters is an interesting character. My only real complaint is that the book could have perhaps followed Vincent's story more as I felt certain parts of his story were rushed but at the end of the day this book is about Evie so his involvement in the story is probably just right. Jim the other leading male character in the book was also wonderful to read about, he's arguably the most thoughtful, caring and selfless man I've ever read about in a novel. A character in On The Other Side is gay. I won't reveal who to avoid spoilers but credit to the author (who has a younger fanbase) for including a gay character. The addition of them didn't feel forced and the character worked perfectly with the story.

A special mention has to be given to the actual book cover, whoever designed it certain deserves a pay rise. Not only is it a stunning cover, every single part of it is entwined with important elements of the story. Not one thing that appears on the cover doesn't relate to the book and I absolutely love that. Also a special nod goes out to Fletcher's fans on the inside which I felt was also a lovely touch.

I'd give this book at solid 4 out of 5 because I did enjoy the story and reading about the character, however for me its not a book I could read over and over again which is why I wouldn't give it 5 stars. I'm very excited to see what Carrie Hope Fletcher has up her sleeve for her next novel because On The Other Side was an impressive debut novel, I can only imagine that she'll only keep improving in future novels.

A love story like no other, this is the debut novel from Carrie Hope Fletcher, author of the Sunday Times No. 1 bestseller All I Know Now.

Evie Snow is eighty-two when she quietly passes away in her sleep, surrounded by her children and grandchildren. It's the way most people wish to leave the world but when Evie reaches the door of her own private heaven, she finds that she's become her twenty-seven-year-old self and the door won't open.

Evie's soul must be light enough to pass through so she needs to get rid of whatever is making her soul heavy. For Evie, this means unburdening herself of the three secrets that have weighed her down for over fifty years, so she must find a way to reveal them before it's too late. As Evie begins the journey of a lifetime, she learns more about life and love than she ever thought possible, and somehow , some way, she may also find her way back to her long lost love . . .

On the Other Side will transport you to a world that is impossible to forget. Powerful, magical and utterly romantic, this is a love story like no other from everyone's favourite 'big sister', Carrie Hope Fletcher.
Posted by Melissa at 16:31