Love To Hate You - Anna Premoli 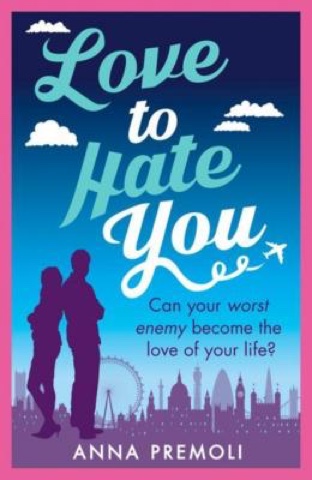 They say not to judge a book by its cover but admittedly I wanted to read this book solely based on its cover, it instantly got my attention. Then what I read the synopsis I knew that Love To Hate You was a book that I just had to read and boy it did not disappoint!

Love To Hate You is about very independent tax lawyer Jennifer and her colleague Ian who is the most desirable bachelor with royal connections. Both met many years ago when they worked on a tax project together and Jennifer was given a promotion over Ian. Since then, the pair have violently clashed and now the company makes sure that the pair never work together again – they even have offices far apart as their arguments are so explosive! Then unfortunately one day Jennifer is running late to the office and somehow one of Jennifer’s clients, Lord Beverly demands that both Jennifer and Ian work on his project. Arguments begin in the offices that are so bad that the pairs boss demands that they work on the project outside work in neutral territory. Then one day the paparazzi photograph Jennifer and Ian on one of their work dinner outings and she is instantly labelled as his new girlfriend which leads to Ian begging Jennifer to pretend to be his girlfriend to keep away the many women that launch themselves at him. However, somewhere as their fake relationship progresses, the lines between what is fake and what is real start to blur.

I personally loved every second of reading this book. I read a lot of romance novels and somewhat surprisingly, I don’t think that I’ve read a book about a love/hate relationship before and it worked so well in this novel. You can absolutely see why Jenny and Ian fell out, they’re both passionate about their careers and when one gets a promotion its bound to cause tension. Although I find it a little ridiculous that they still carry it on to such extremes years after the event, it didn’t affect my enjoyment of the book.

Jenny and Ian are great lead characters, providing some absolute laugh out loud moments. One of my personal favourites being when vegetarian Jenny ends up being involved in a hunt. Although they come from very different families, Ian’s being a well to do, noble family who love to hunt and Jenny’s being strict vegetarians who despise nobility and helping the rich, they somehow work so well together other they’d both disagree with that statement! Being able to read Jenny’s thoughts was a great addition, she’s a very funny character. Ian was a great love interest. He was the perfect gentleman throughout, it’s no wonder everyone but Jenny falls madly in love with him!
My only slightly gripe about Love to Hate You is that I feel that the pacing was a little rushed towards the end, maybe that was just me not wanting the book to end though. If you’re a fan of love/hate relationships I really do think you’ll love this book. I’m certainly going to be keeping my eye out for future novels by Anna Premoli.

Jennifer and Ian have known each other for seven years. They are leaders of two different teams in the same London bank, and are constantly engaged in a running battle to be number one.
Ian is a handsome, wealthy and sought-after bachelor; Jennifer is a feisty, independent lawyer. When they are thrown together to work on the same project, Ian makes Jenny an offer she can't refuse: to have free reign of their rich client if she pretends to be his girlfriend.
Soon, it becomes more and more difficult to tell the difference between fiction and reality...
Posted by Melissa at 18:42