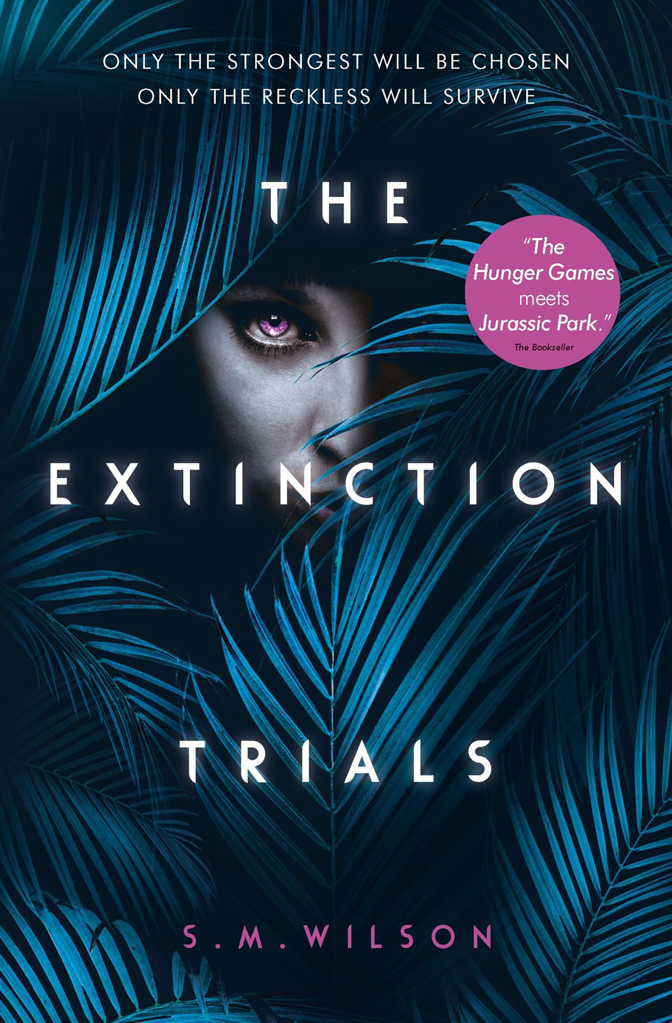 Fact – everyone loves dinosaurs. No matter how old you are I think you’ll always have a part of you that likes dinosaurs so when I received The Extinction Trials by S.M. Wilson in my latest Wildest Dreams book club box its safe to say I was excited to read it.

The Extinction Trails takes you to a land with dinosaurs. The human race is rapidly expanding so needs more space to expand so they host a series of trials to find willing people to go to the continent of the dinosaurs to collect eggs in order to try cause their extinction to make more space for humans. The book follows the story from two contestants point of view, Stormchaser and Lincoln. They both have their own reasons for taking part in the trails. Little do they know what will be ahead of them when they take part in the trials.

The book itself is being advertised as The Hungers Games meets Jurassic Park which is a pretty big statement in itself. However, now I’ve read the book I can honestly say this is the perfect way to describe this book. It’s a gripping story from start to finish – and did I mention it features dinosaurs?! The group of trialists are from a variety of backgrounds and I thoroughly enjoyed reading how they worked together as a team in order to collect the dinosaur eggs. However, like the Hunger Games it does feature multiple deaths so it may not be too suitable for younger readers.

Chapters are told from the point of view of Stormchaser and Lincoln. Now, normally I’m not a huge fan of chapters from multiple perspectives as I find it makes stories a little confusing and difficult to follow. However, this is the same story and it absolutely flows from two perspectives. To be honest, this is one of the few books that I thoroughly enjoyed being told from multiple perspectives and I felt that it really benefitted from it as you could read about what is going on in both of their heads. Aside from that they’re both very different characters but both equally as enjoyable to read about, normally with dual perspectives I majorly favour one of the characters but in this book, I really did enjoy reading about both.

As the synopsis suggests the book is full of danger where characters are willing to stab each other in the back in order to win. The story truly was addictive, I read this within a couple of days despite it not being a particularly short book. It was full of twist and turns and chapters that made you just continue reading as you just had to know what happened next. The continent the dinosaurs live on is so vividly described to the extent I kept checking out of my window every time I heard a noise just in case a T-Rex was lurking outside my window! I was transported to the world and as I read I found myself becoming more absorbed in this world.

The Extinction Trials is going to be a series but the book has a good enough ending that it works as a standalone. However, it still left me wanting more so I’m already eagerly waiting the next instalment in this book series! To be honest, if I saw this book on a shelf I admit I probably wouldn’t have picked it up, I received it in my Wildest Dreams subscription box and I’m so thrilled that I did because this book is brilliant. If you liked The Hunger Games (and dinosaurs!) you will 100% love this book and I can only recommend that you make it your next must read book.

Welcome to the Extinction Trials.

In Stormchaser and Lincoln's ruined world, the only way to survive is to risk everything. To face a contest more dangerous than anyone can imagine. And they will do anything to win.

But in a land full of monsters - human and reptilian - they can't afford to trust anyone. Perhaps not even each other...