Under The Spotlight - Kate Willoughby 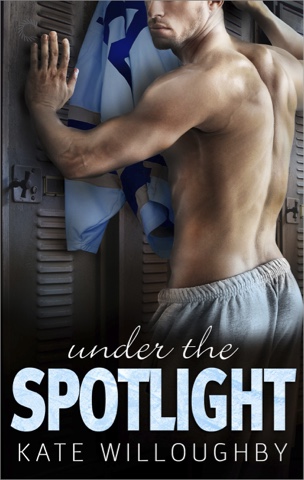 Under The Spotlight by Kate Willoughby tells the story of actress Christine and hockey player Joe. Christine finds herself helping a sick child have the day of her dreams which is to meet star Barracudas player, Joe Rutherford. Out of the blue she contacts him in the hope that he agrees to grant the wish. Little does she know that he already saw her in theatre in Chicago and waited outside in the rain just to meet her after the show. The attraction between them is undeniable but as Joe is heading for retirement and Christine’s career is rocketing, can a relationship between the pair survive?

I loved the story I just didn’t really like Christine. I thought at the beginning I would love reading about her but towards the end I personally feel she is very insensitive to Joe’s feelings which caused me to really not enjoy reading about her. However, if a film version of Under The Spotlight is ever made, I already know exactly who I want to play her which just goes to show how brilliantly she is described in the book. Joe however was a great character who I loved reading about throughout. He really cares for both CJ and Christine and although he’s getting old for the hockey world he is still incredibly passionate about the sport and despite me knowing nothing about hockey his enthusiasm made me interested. I especially loved his relationship with new player CJ who he takes under his wing.

The conflicts in the book about Christine’s acting career are an interesting one which I feel you will either love or not. Joe doesn’t like the fact that his girlfriend is going to do sex scenes and she takes this very badly. It’s interesting and made me ultimately think how I’d handle it. I shared Joe’s opinions on it which unfortunately made me dislike Christine as she just didn’t see his point of view at all. I was somewhat worried that a love triangle would take place in this novel but I am very thankful that it didn’t as I think it would’ve made the book so much less enjoyable to read.
Under The Spotlight is actually book number four in the series but I read it as a standalone, it really isn’t necessary to have read the others in the series. However, I now really want to read the others as the little you see of Joe’s teammates in this novel really makes you want to read more about them and their back stories.

If you’ve read any of the other books in the series I’m pretty certain you will absolutely love this book too. If you love sport or not, this book is a great, must read romance novel.
Synopsis -

Stage actress Christine Caspary couldn't care less about hockey, but when she first sees Joe Rutherford playing in a Barracudas game her mind goes to all sorts of dirty places. By happy chance, her work with Grant A Wish gives her an opportunity to meet him in the flesh.

Right winger Joe Rutherford saw Christine perform when the team went to see Chicago and was so taken with her, he secretly saw the show a second time, alone. When the gorgeous actress with spectacular legs contacts him out of the blue asking for a favor, it's a no-brainer.

Their chemistry is off the charts. Things heat up quickly and they can't keep their hands off each other. Soon they're hooking up whenever their busy schedules allow and having hot phone sex every night at midnight when they don't. But Joe's time in the hockey spotlight is fading, just as Christine's star begins to rise. When she gets her big break into a TV career, how will Joe take to being the arm candy for a change?

Under The Spotlight - Kate Willoughby is out now. Click here to download the Kindle edition from Amazon
Posted by Melissa at 19:26