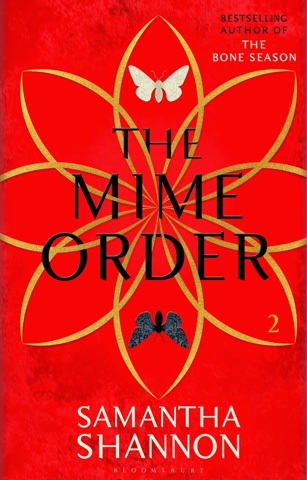 The Mime Order by Samantha Shannon is book number two in The Bone Season book series. Somewhat unwillingly, Paige finds herself back within the safety of the Seven Seals and there mime lord Jaxton Hall. However, things have changed this time round. Paige is now London’s most wanted and she now has knowledge including that of the existence of the Rephaim. The story is so complex it really is hard to describe what happens so I’ll include the books Goodreads synopsis in this blog post as well.

The Mime Order takes place literally seconds after The Bone Season stops. Truthfully as I read The Bone Season over a year ago now I’d forgotten a lot of the details about what happens and some of the information given in the first book so it took me a few chapters to reconnect myself with the story. If you’re planning to read The Mime Order definitely make sure you read The Bone Season first otherwise I think it may be quite difficult to get in to as it is set in the same world with the same characters.
What I liked about The Mime Season is how we see more of Paige’s life in the Seven Seals and how we’re introduced more and more to the other members of the group. Paige once again is such a great character to read about as she so desperately tries to solve what is happening. The plot is quite complex and throws so many twists at you and when you think you’ve got the storyline cracked, what happens isn’t what you expected to happen at all. Once again Samantha Shannon’s wonderful detailing of London is unbelievable, the world she has created just lifts straight from the page as you’re reading. I absolutely love the way that she writes.
I can’t even begin to explain how much I need book number 3 in my life already. I felt like throwing my kindle out of the window when I turned for the next page and that was it, the end of the book. Exactly the same happened to me at the end of The Bone Season; Shannon certainly has a way of leaving the biggest cliff hangers at the end of books. However, I at least have an hunch of what may happen in book 3. Despite not being fond of the ending, I still managed to race through the quite thick book in a couple of days because I just could not put it down.
Although I’ve absolutely hated the endings of The Bone Season books so far because of the cliff hangers the rest of the book is superb. Follow up books tend not to be as good as the first book but I think I enjoyed The Mime Order even more. If you’re looking for a new book of the fantasy genre and you haven’t read The Bone Season yet you must pick them up next. It may take a bit to get into due to all the new information you’re given but I’m convinced most people will love these books! On a final note, these books seriously need to be made into films one day.
Click here to buy The Bone Season/The Mime Order from Waterstones.
Synopsis -
Paige Mahoney has escaped the brutal prison camp of Sheol I, but her problems have only just begun: many of the survivors are missing and she is the most wanted person in London...

As Scion turns its all-seeing eye on the dreamwalker, the mime-lords and mime-queens of the city's gangs are invited to a rare meeting of the Unnatural Assembly. Jaxon Hall and his Seven Seals prepare to take centre stage, but there are bitter fault lines running through the clairvoyant community and dark secrets around every corner. Then the Rephaim begin crawling out from the shadows. But where is Warden? Paige must keep moving, from Seven Dials to Grub Street to the secret catacombs of Camden, until the fate of the underworld can be decided.