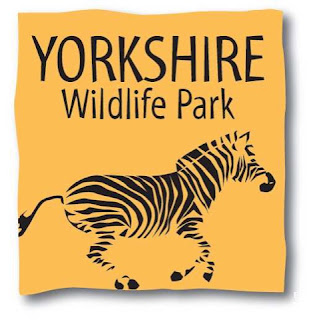 It's no secret that I love the Yorkshire Wildlife Park (click here for the post I've done about the entire park) and even less of a secret that my favourite animals in the park are Victor and Pixel the polar bears. So when the opportunity arose to go on a VIP Polar Bear Experience I couldn't resist.

The day starts off early, an hour before the park opens to the general public which only enhances the experience. For the whole time you're doing the experience it feels as though you're doing something really special as you're the only non staff members in the park for the duration.

You're taken behind the scenes to help prepare the food that would later be used to feed the polar bears. We were shown the chart which shows what each animal in the park has planned for dinner each day which I found extremely interesting to see. On the day of my experience the polar bears were to eat a selection of fruit included pears and melon (which we helped to chop), eggs, horse meat and then a scatter feed of fish in the enclosure. Whilst in the food preparation area we were lucky enough to see one of the park's lionesses, Julie, staring at us from the other side of the bars.

We were then led to Project Polar, home of Victor and Pixel the polar bears where I got the opportunity to feed both the polar bears. It was incredible to see Victor and Pixel up close, you can't even begin to explain the sheer size of them until you're right next to them, in particular the size of 16 year old Victor. It was such a wonderful experience to be able to feed them both. Considering how big and dangerous polar bear are known to be in the wild, Victor and Pixel were so gentle in taking the food off the tongs. It's impossible not to want to spend all day with them!

Having visiting the park quite a lot even the experience of being let into the polar bear enclosure to hide food and place toys for them was fantastic. It was so strange to see the view that Victor and Pixel will see and when you're down there yourself you really do get the feel of how large the enclosure actually is. It was unbelievable to then be able to open the gates that led Pixel and Victor into the enclosure and then watch them sniffing out the food I'd just hidden for them.

The whole experience is then finished off in the park's Safari Cafe where you're treated to a complimentary breakfast before you're free to explore the rest of the park. The cafe service was great and the breakfast is delicious.

The polar bear experience is quite expensive at £300 for two people but I personally thought it was worth every penny. How many people can say they've had the opportunity to feed not one but two polar bears? Vicky, the staff member who did my tour was fantastic. She was so enthusiastic about all the animals in the park and was more than happy to answer all our questions. I really love Victor and Pixel and to get so up close to them really is a one in a lifetime experience. If you know someone who loves polar bears and wants a more hands on experience with them or just loves Victor and Pixel then this really is a must buy experience for say a birthday or even just a treat. The park also offers VIP tours with other animals if polar bears aren't your thing. Yes it's expensive but truthfully I haven't stopped talking about it since, it was one of the best things I've ever had the opportunity to do.

For more information on all the animal experiences the Yorkshire Wildlife Park offers click here.