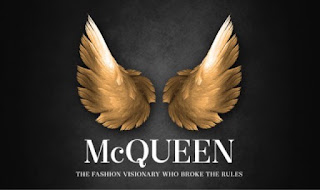 McQueen The Play tells the story of the famous fashion designer Alexander McQueen, who is referred to by his first name Lee for the majority of the play. Despite it being five years since McQueens death, interest in him has never been higher with an exhibition at V & A museum currently open as well as the play.

Truthfully, I knew very little about McQueen himself. I think however knowing the bare minimum is enough and even if you're not his biggest fan before you go into the play it will not spoil your enjoyment at all. The play is wrote by James Phillips and it is predominately quite a serious play although it does offer some more lighthearted dialogue which had the entire audience chuckling.

Walking into the theatre McQueen (played by Stephen Wight) is already on stage clearly having an internal battle with his mind. It took a few moments to notice that he was fiddling with a belt, the item of clothing famous known for assisting his suicide leading me to believe the play may in fact begin with his death. Thankfully this isn't the case! When the play begins Lee is soon introduced to Dahlia (played by Dianna Agron) who breaks into his house to steal one of his dresses. Lee ends up befriending her and the pair spend a whirlwind night together in London. Dahlia ends up being so much more than just a burglar after taking a pretty dress to wear. Acting from both Wight and Agron is superb. The pair work well together on stage and really bring to life their characters, it is worth seeing McQueen for their acting alone.

St James Theatre was the perfect venue for McQueen. It's small, intimate setting where every seat felt like being front row provided the audience with the opportunity to get really into the play. I know that I felt like that I was physically living through the night with Lee and Dahlia. The scenes were wonderfully portrayed throughout. My favourite being the opening scene where is was impossible to tell which of the mannequins were fake and which were real people. I also enjoyed how scenes changed, my favourite being when Lee and Dahlia took an underground trip.

I went into the St James Theatre expecting the unknown. I didn't know what to expect or if I'd even enjoy McQueen at all. However, McQueen is an intense, intimate and enjoyable performance. Unfortunately the plays last show is 27th June so if you want to see the play you must hurry and get tickets.