It seems a little pointless to be writing this blog post as its based on a subscription box that is now sold out for this particular box and February’s box will be arriving shortly but I’m in the mood to write something so here goes!

Jumping on the subscription box hype is successful YouTuber, author and West End star, Carrie Hope Fletcher creating her very own book club called Carrie’s Book Club. As the name suggests Carrie’s Book Club is a book club except it doesn’t actually include a book just items that you could use whilst you’re reading a book. The ideas in the box each month are loosely themed around a book meaning that if you haven’t read the book or you already the book you can enjoy the items regardless.

I was very kindly gifted a 3 month subscription to Carrie’s Book Club as a Christmas present with the first box that I received being January 2016’s. I was pleasantly surprised to see that this box was themed around my favourite book series, Harry Potter.

January’s box contained a light up candle, a bath bomb, three butterscotch sweets, a lollipop, a bookmark and a letter from Carrie. According to the letter that was included, this box also contained a blackcurrant tea but I didn’t seem to have that in my box, but I don’t like blackcurrant flavoured things so no complaints from me! 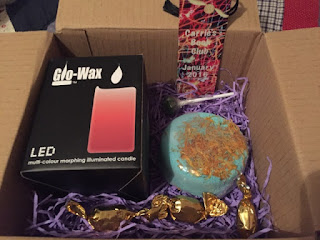 At £16 + postage for a one off box or £48.00 + postage for a three month subscription I personally think that Carrie’s Book Club is a little overpriced. I was incredibly surprised when I opened the box then it didn’t actually contain a book or at the very least a coupon to download an eBook, however it does clearly state on the website that it doesn’t contain a books it was completely my mistake for assuming it would have a book. I appreciate that today people read books in different ways so it would be quite difficult to do a book club containing a format that everyone who subscribes want but I feel that without a book it makes the box quite expensive for what you get.

Carrie’s Book Club has existed for over a year now so it obviously must be a successful subscription box. Although I think I would’ve been disappointed if I had paid for the subscription myself, I did thoroughly enjoy using the items that were including in the box. It great to get mystery items through the post that you can enjoy using as soon as they arrive. I also like the fact that it’s themed around a book, hopefully younger subscribers may be more enticed to pick up the book and read it which can only be a good thing. Fans of Carrie Hope Fletcher will love this book, however if you want to get a book and feel like you’ve got value for money this certainly isn’t the subscription box for you.