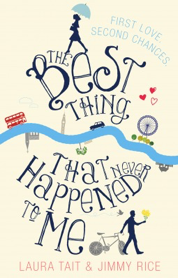 For me it was fascinating that this book was written by two authors. At not one point during The Best Thing That Never Happened To Me do you for once think that it was. Despite being wrote by two authors the book flowed well and I couldn't find any potential points in the plot that had been missed.

The book itself is told from the perspectives of the two main characters Holly and Alex. Having the book told from both perspectives enables us to see the events that occur from both sides well. It made me laugh on multiple occasions just how wrong they both were about thinking they knew how the other felt. I feel that it was definitely a plus side of the book.

Young Holly dreams of travelling the world but as she's gotten older she has lost that dream and has now settled for working as a PA. Holly is dating her boss, Richard. Richard is very insistent on the fact that Holly must keep their relationship a secret from everyone. Holly isn't having some affair with a married man, Richard just thinks it'll be better to remain a secret. It takes a good way into the book for Holly to realise that not everything Richard says is right. Alex on the other hand has always wanted to be a teacher. He has achieved his dream but didn't expect to be teaching students who had no interest in learning. Both characters are very relatable which I feel is an attribute to the story as you really feel a connection to Alex and Holly.

Holly and Alex are from the same Yorkshire village and were best friends when they were younger. They hadn't seen each other for 11 years and then Alex moves to London where Holly now lives. Holly and Alex have been hopelessly in love with each other most of their lives but neither have ever done anything about it.

The book explores the relationship between Alex and Holly and makes you wonder if they ever actually will admit to each other that they love each other as more than friends. I found the book very engaging. My only major gripe is the ending as although it is implied I would've loved to know exactly how Holly and Alex ended up. Its left me desperately want to another book to find out exactly what happens!

Everyone remembers their first love.Holly certainly remembers Alex. But she decided ten years ago that love wasn’t about mix tapes and seizing the moment – though she’s not exactly sure it’s about secret dates with your boss, either.
But what if the feelings never really went away?Alex wants to make every moment of his new job count. It’s a fresh start in a big city, and he’s almost certain that moving to London has nothing to do with Holly. Almost.
How do you know if it was meant to be… or never meant to happen at all?
Posted by Melissa at 19:59